From the moment I woke up Friday morning, I could not wait until my 8:30PM reservation at Cabane à Sucre. All day, all I could think about was how satisfying I expected Martin Picard’s food to be. Let me tell you, he did not disappoint.

This restaurant is tucked nicely in the Québec countryside and provides a comfortable escape from the hustle and bustle of the city. Upon entering the restaurant, you instantly feel at home. I opted to sit at the bar to get the full experience of the friendly atmosphere of the cabin. The waitresses were eager to explain any questions about the pre-set menu and provided service similar your mother at a family dinner.

The dining room is all wood and celebrates classic Québec traditions, such as the apple harvest, and of course maple syrup. You walk in and see meat smoking, meat you are about to enjoy. Just a warning: this is not the restaurant for any vegetarians. The smells of mouthwatering food immediately encompass your senses and I personally could no longer withhold my excitement to indulge. 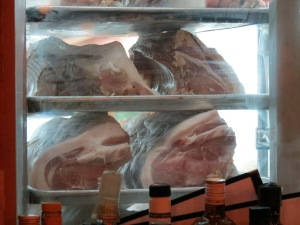 My excitement increased further when I saw Martin Picard. He was very welcoming, taking his picture with me and signing my cookbook. We even had a nice conversation at the bar. Of course his first question was: “what is your favourite hockey team?” Good thing we are both Habs fans! All I could say is I was starstruck, I consider him a revolutionary in cuisine. He has embraced the heritage of Québécois cooking and put his spin on them. Who else can you think of that truly cherishes the whole hog?

The meal began with a cool glass of homemade alcoholic apple cider and four appetizers all brought out simultaneously. 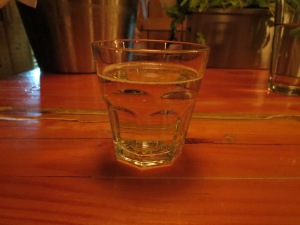 The first appetizer was apple pie topped with melted cheddar cheese and foie gras. The apple pie had an amazing sauce surrounding it that tastes like a caramel made with the juices remaining from cooking the pig. This was one of the many gluttonous dishes to come but it was delicious. The freshness of the apples, mixed with the crisp crust was only enhanced by the fat from both the cheese and the foie gras. The addition of tarragon-spiked double cream only furthered the lovely relationship between sweet and savoury. 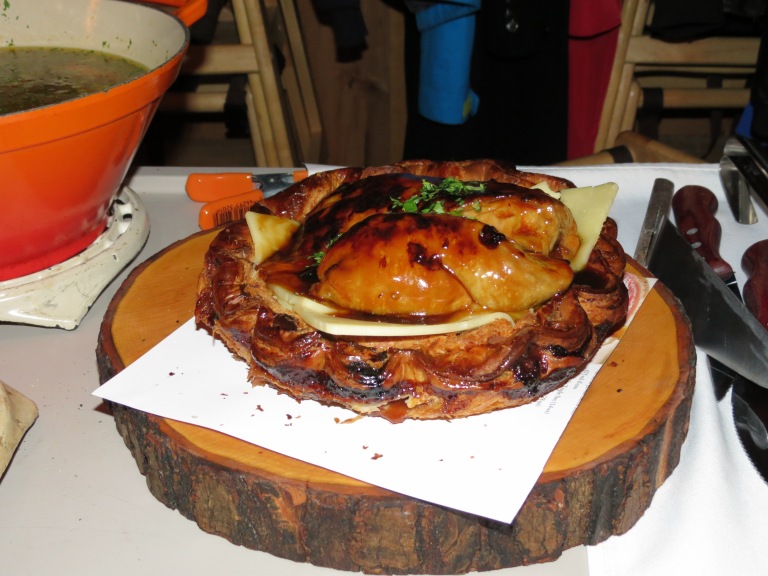 The next appetizer was one of my favourite dishes of the night. It was a “vegetable soup” with sturgeon, veal, and pork. It tasted as if it was simmered for hours and the flavours were so developed that I could have been happy eating just soup for dinner. The already delicious soup was made even better (if that is possible) by the suggested addition of a pesto that was sitting on the table. 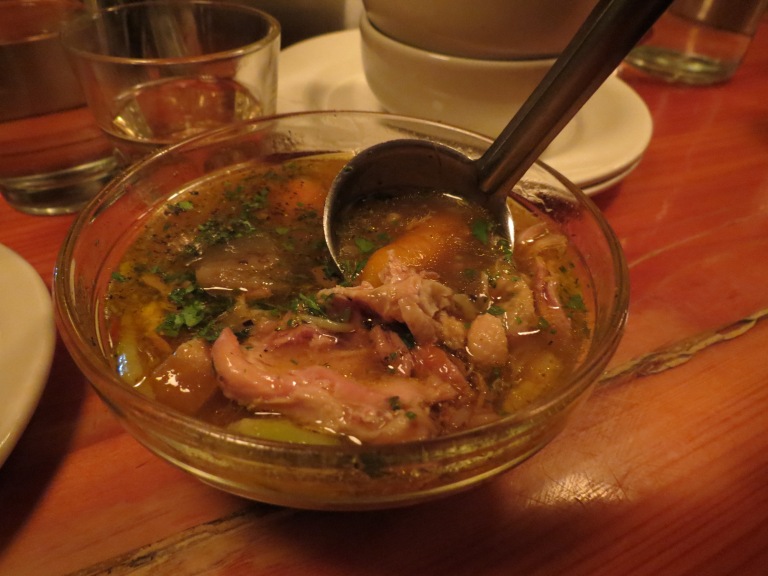 Another favourite was the squash cream risotto that was mixed in front of the table in with freshly scrapped Parmesan cheese. Have you ever before seen your risotto mixed in a big wheel of salty Parmesan cheese? This was a first for me but I could not wait to eat this dish as the combination Parmesan and squash is well-loved. The risotto was one of the best I have eaten and was elevated by topping it with in-house made dried sausage resembling a salami.

The final appetizer was a refreshing salad that you actually cut off the plant yourself. I have to say, it was interesting cutting my own salad. It was lightly dressed with an apple cider vinegar based vinaigrette and served alongside an apple salad tossed with black pepper and walnuts. This appetizer was a good way to refresh your palette before diving into the heart of the dinner, the entrées. 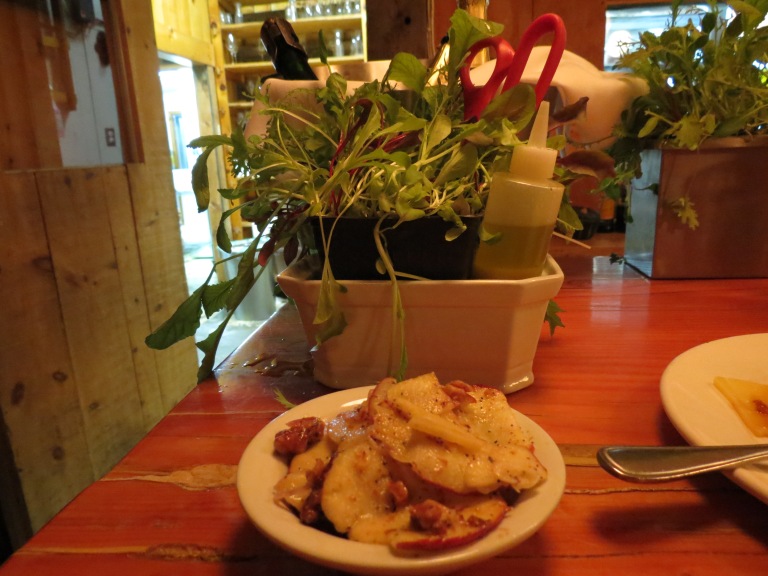 Before continuing, I must warn my readers, the first entrée was hog-heaven. Anything from the pig was included on the meat platter my guests and I were served next. The meat platter had every part of the pig on it. The platter was loaded to its maximum with pork belly, sauerkraut, mortadella, pork loin slathered in a béchamel sauce, liver pancakes, ham slices, pepperette (sausage usually made from ground meat), what was described as an old piece of think bacon, garlic sausage, tongue soaked in vinegar, and gelatinous pork foot. My favourite element of the meat platter was the “pig’s liver pancake” as it was introduced to me. It reminded me of Irish bangers, a beloved classic in my house. I also truly enjoyed the pig’s foot. The slow cooking of the foot yielded tender meat mixed with slightly chewy cartilage. This resulted in an enticing mouth feel as eating the foot. All of the meats were also served with an apple mustard, which I enjoyed so much I ended up buying a jar and have used it on a regular basis to make my favourite turkey sandwiches just that much better. 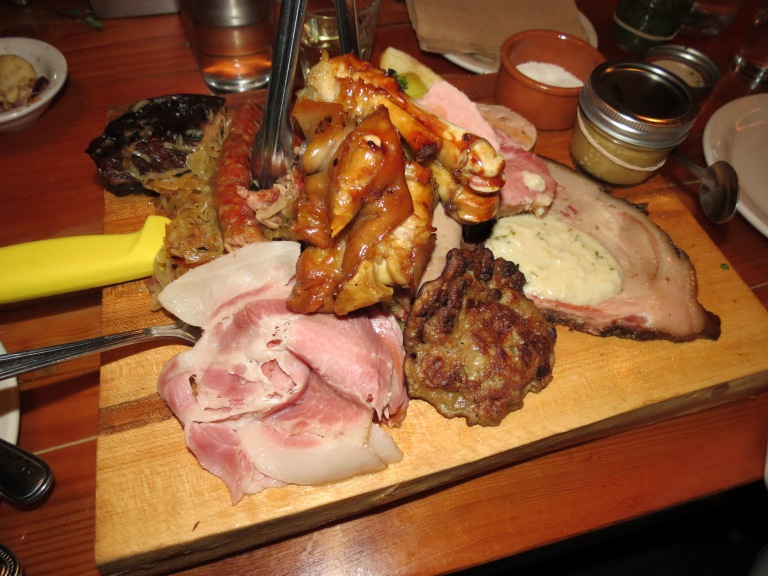 Thankfully, the next entrée was a cheese and bread platter, because after all that meat I was not ready for more. For the lover of strong cheeses, this plate would be heaven. But for me, the highlight of this dish were the breads – homemade baguette, onion roll, and cranberry and nut crisp. 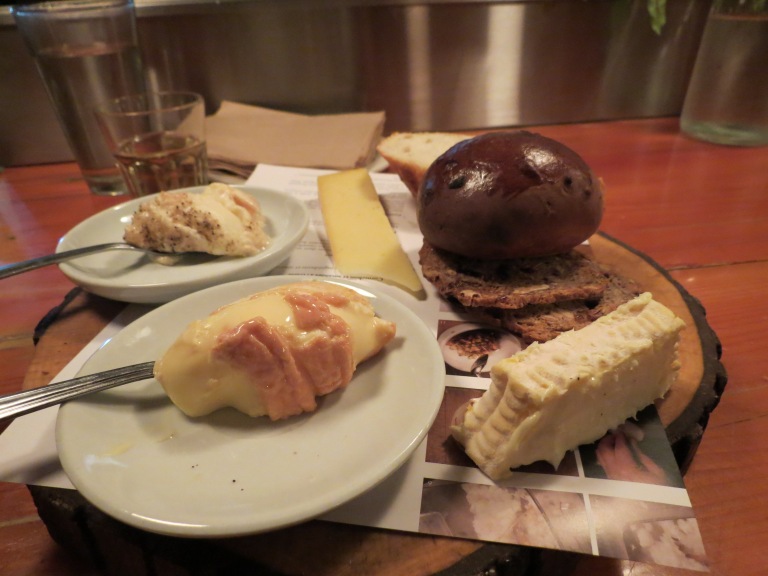 Finally came the three, yes I said three desserts. After all the food, the chef could not skimp on dessert. The first dessert brought to the table was a twist of stout and squash ice cream. The flavour combination was unlike any I have had before. Although interesting, I think I will stick to my traditional cookies and creme ice cream. Next was a squash mille-feuille with squash creme between numerous layer and topped with a confectioners’ sugar based icing. My favourite dessert was the last one presented, doughnuts stuffed with a generous helping of homemade apple sauce. These were served warm and the juxtaposition between the warm fried dough and the cool, refreshing applesauce was truly satisfying. Even though I was quite full at that moment, I did manage to eat the entire doughnut. 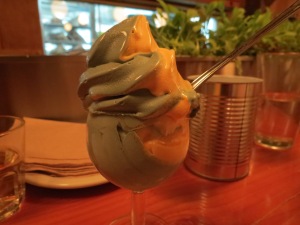 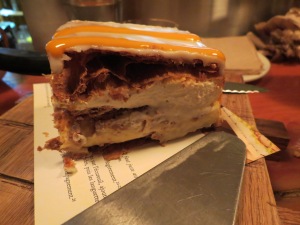 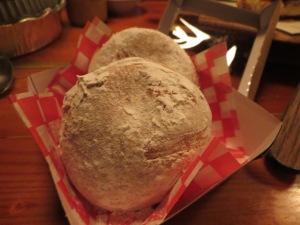 Overall, the meal was a delicious celebration of the pig and Québec. For numerous nights, I was dreaming about many dishes and wondering how I could replicate them at home. In addition to a great meal, I was also impressed with the value for the money. For a mere $50 a person, you receive all this food. I walked home with a full stomach and four stuffed take-out containers. I will definitely be returning to Cabane à Sucre, maybe next time to try the maple season meal.

Still celebrating milestones with food! 🍆🧀🍅 #zoomedthroughmyphdseminar #funnystickers #eggplantparm #homecelebrations
Recently, I’ve been craving dishes/snacks my parents made for us as kids. My Dad is the one who taught me how to make crêpes and his mother taught him, it’s seemingly a skill passed down in the Noë family. He would always make us the classic lemon juice-sugar crêpes as a special treat, but I have not made crêpes since well before my celiac diagnosis. All that changed this weekend, when gluten free crêpes became the Sunday adventure. Even rolled the crêpe up, instead of folding them, because that was the most fun way to eat it as a kid. #covidcrêpes #familymemories #glutenfreetreats
A few sections of crab and a lot of fun! Wish I was sharing it with my Dad @adrianjnoe (he usually comes to visit for snow crab).
Appreciating the little things even more these days, especially walks/runs with the big goofball!
The three highlights of my week: 1) MY SISTER! 2) @mtlrwrf is now officially a non-for-profit and we are now sending money to restaurant workers in need. Applications will be reopening soon and please keep donating (if you can). 3) Snow crab and other various cooking endeavours including me anxiously tempering chocolate.
Cooking anxieties away(ish). A treat steak dinner, post-Zoom meeting leftover steak tacos for lunch, and Baylor!
I made coffee ice cubes, I used @canal_roasters coffee beans, I played LCD Soundsystem (maybe some Katy Perry too 😝), I did an old @nytimes crossword, and pretended to be sitting in @liliandoli on a brisk spring morning. It was only missing a few special people, but the animals did their best to fill in.
It is important that I start by acknowledging how lucky and thankful I currently feel. However, it is also okay that all of us take the time to properly grieve the sudden changes to our lives as a result of this pandemic. My prevailing struggles are not even a fraction of what others are experiencing, but they are still my struggles that I cannot ignore. “Coronavirus has upended our world [and] what we once held as solid is no longer something we can rely on.” All of us are coping with this reality. For me, it was shocking but I am slowly establishing a new routine and realize these changes are for the greater good. A few weeks ago, I would always have towels, suits, caps, and goggles drying throughout my apartment in preparation for upcoming swims. But, I have now accepted that I will not be able to touch a pool for at least a couple months and seeing all my swim gear daily has been challenging. I am aware, this is NOT a big deal when compared to others’ hardships, but it is a reality I never thought I would have to come to terms with. Swimming is how I manage my mental health, how I process the unknown and uncertain. Swimming has gotten me out of a lot of dark moments and has always been there for me. To properly embrace my new normal, I decided that tonight was the night to pack up my swim stuff. After an at-home workout (stay active!), I gathered my gear and put it in the corner of my room. Here comes the comedy. First, I cried. Then, I laughed at myself for crying… about a pool. Finally, I had the biggest laugh because I visualized how terrible that first swim back, in a few months, will look and feel. If you are a swimmer, you know that after a week out of the pool, you come back to feel like you are drowning. All of this to say, it is okay to have moments when you feel down and moments of joy, even both in the span of 5 minutes. There is no “proper” way to handle life right now. Take care of yourself and your loved ones. Acknowledge your feelings. Stay home and find yourself a new routine. Maybe this moment of social distancing and flattening the curve is an opportunity to discover a new passion, a new hobby, a new friend, etc.
Throwback to a time when my biggest concern (at least for that night) was if I could floss or not (is that what this dance move is called?).... Here’s to many more cooking nights and terrible dancing (solo for now, together in the future)! 🎥: @chewthroughthepain tolerating me in January
%d bloggers like this: